Around the time Jim Murray described the award-winning Yamazaki as ‘near indescribable genius’, I started developing a passion for washoku. Whisky slotted into this as I sipped wee drams of the Japanese ‘water of life’ with my father-in-law, post-dinner in Osaka’s izakaya and around campfires in Hokkaido.

Despite my fortunate introduction to Japan’s whisky scene (recently, I’ve been given a bottle of Suntory’s Hibiki 17!), I wanted to learn more. So, how could I refuse when Japanese whisky expert and author Brian Ashcraft invited me to the launch of his new book Japanese Whisky: The Ultimate Guide to the World’s Most Desirable Spirit with Tasting Notes from Japan’s Leading Whisky Blogger.

I took this opportunity to tap into Brian’s knowledge to help whisky-lovers get the most out of their favourite tipple while visiting Japan.

Chris: How would you characterise whisky bars in Japan? What can visitors to Japan expect regarding the range and qualities of whiskies available, appearance and ambience, and service?

Brian: Most whisky bars in Japan specialise in a range of whiskies, with a strong footing in Japanese whisky and Scotch.

Many bars in Japan are often small, offering a more intimate experience. If you are in a bar with less than 12 seats, you and everyone else in there will have a first-row seat. You will notice what the bartender is doing when serving your drink or other customers’ drinks. The bartender is operating under a microscope, which might be why there is a greater awareness of service, even for Japan.

Chris: What premium Japanese whiskies do you recommend for whisky connoisseurs visiting Japan?

Brian: This is a difficult question! Because, honestly, you can go through a lot of money when drinking super-premium Japanese whisky. A shot of The Nikka 40, which contains some of the oldest whisky Nikka has made, can range between 30,000 yen and 50,000 yen. So, if you start drinking other super-premium bottlings, you can easily spend thousands of dollars.

If you think Japanese whisky is good now, just wait another 10 or 15 years. It’ll be even better. —Brian Ashcraft

Chris: What bars do you recommend for whisky-lovers in Tokyo, Osaka and Kyoto?

Brian: Tokyo is home to numerous world-famous bars, such as Star Bar Ginza, Bar High Five and Zoetrope. My favourite Tokyo bar, however, is Bar Amami in Gotanda. It’s a very comfortable place for me, and I always have a nice time there.

The best places to visit in Kansai are One Shot Bar Keith in Osaka, which is one of the best Japanese whisky speciality bars in the country; Bar K, which is also in Osaka and has amazing cocktails; and Bar Cordon Noir in Kyoto, which has a terrific selection of world whisky.

Chris: Are there any whisky distilleries in Japan you can visit?

Chris: Can you recommend some good value Japanese whiskies?

Brian: Here are some excellent value whiskies, that at the time of writing, are all available for $125 or less:

I go into them in some detail at the best affordable Japanese whiskies you can buy.

Chris: For visitors who want to take a bottle (or more!) home with them from Japan. Where do you recommend they buy it from? The airport or a specialist shop?

Brian: These days, it’s still hard to find fairly basic releases like Yamazaki 12, so I’d recommend buying it anywhere you can find it!

Chris: Turning our attention now to your book and your tastes. What motivated you to write your book Japanese Whisky: The Ultimate Guide to the World’s Most Desirable Spirit with Tasting Notes from Japan’s Leading Whisky Blogger?

Brian: Many years ago, I wrote a big feature for Wired Magazine on absinthe, which you can read right here. In part because of that feature, absinthe became legal again in the United States. I had become interested in liquor history as an Art History major specialising in 19th-century European art, and the experience of writing that Wired feature got me even more interested in liquor production, history and culture.

I live in Osaka. This is the birthplace of Japanese whisky. Writing a book on Japanese whisky was a wonderful way to explore the history of the area I’ve called home since 2001.

Chris: What can readers expect from your book? What aspects of the Japanese whisky story do you cover?

Brian: I wanted to examine what exactly is Japanese about Japanese whisky. Generally speaking, the basic process is how Scotch is made, or how bourbon is made, in the case of some of Kirin’s grain whisky. However, the resulting Japanese whisky is different and reflects the country’s culture. I wanted to draw those connections between religion, language and culture in a natural way.

Also, we did our best to unearth new information and never before published photos and offer new insights into Japanese whisky.

Chris: How many Japanese whiskies did you taste for the book? It appears that you tasted a lot!

Brian: I did! My co-author and collaborator, Yuji Kawasaki, however, did most of the tasting and wrote all of the tasting notes. I’ve noticed with my kids here in Japan that growing up in Japan gives you a different baseline of flavours than if you grow up in, say, the United States. Your flavours and aromas of memory are naturally different. Kawasaki’s writing is very evocative, so I thought it would be interesting to hear what a Japanese whisky connoisseur had to say. I felt his tasting notes would offer greater insight.

Chris: What are the most memorable moments from your travels while researching the book?

Brian: The book’s photographer Idzuhiko Ueda and I travelled throughout the country. We had wonderful memories of visiting places and meeting all these whisky makers of today and yesterday. There are too many!

Chris: I’m interested in the connection between Scotch and Japanese whisky, which you cover in your book in detail.

A few years ago, while choosing a Scotch whisky at London Heathrow airport as a gift for my friend in Osaka, I had a fascinating conversion with the Scottish assistant. She told me that the Japanese consumption of Scottish whisky in the 1970s and 80s saved the struggling Scotch whisky industry from declining (due to a drop in domestic demand). What’s your take on that?

Brian: I certainly believe that a booming Japanese economy during the 1970s and 80s helped out Scotch sales in Japan. However, the Scotch whisky industry was starting to become quite concerned about the Japanese whisky industry and how much the quality was improving.

Chris: What one word describes Japanese whisky for you?

Brian: Flexible. The Japanese do not have historical baggage when approaching whisky making. They adhere to tradition but are not afraid of pushing boundaries and trying new things.

Chris: And finally, I’ve got to ask! What are your top three Japanese whiskies?

Brian: This is a difficult question because there are some whiskies I love which are either insanely expensive, difficult to find or no longer available. It’s also like listing your three favourite songs or three favourite movies. It changes, no?

I think whisky should be drunk and enjoyed. If you have the money to buy super-premium stuff, then great! But there are also plenty of budget ones that I always enjoy. If I’m buying for home, my go-to regular whiskies are Nikka From the Barrel and Hibiki Japanese Harmony. Both are good values for money and easy drinking. If I’m out, I’m up for whatever a bar has gotten in recently or if they have any old chestnuts they’ve squirrel away.

Japanese Whisky: The Ultimate Guide to the World’s Most Desirable Spirit with Tasting Notes from Japan’s Leading Whisky Blogger 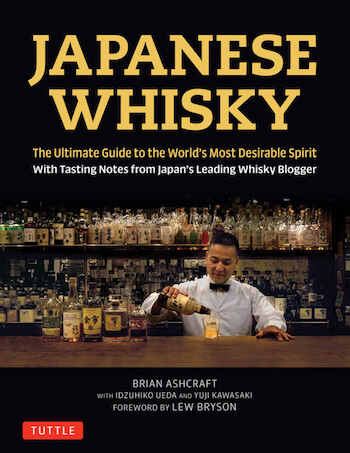 Find out more about Japan’s whiskies and distilleries and the history and culture of Japanese whisky in Brian’s book. Here’s what the experts are saying about Japanese Whisky: The Ultimate Guide to the World’s Most Desirable Spirit with Tasting Notes from Japan’s Leading Whisky Blogger.

‘Brian Ashcraft’s guide to Japanese whisky takes you into the kind of detail you need to make a real buying decision. What does the whisky taste like, who actually makes it, how is it made? It’s all here, in an engaging, well-organised guide.’ —Lew Bryson, author of Tasting Whiskey

‘A comprehensive look at Japanese whisky and, through it, key aspects of Japanese culture. Enjoyable reading, whether you’re taking your first tipple or are a Japanese whisky aficionado.’ —Anna Fifield, Tokyo bureau chief, The Washington Post

‘These days, everyone is talking about Japanese whisky, so thank God for Japanese Whisky: The Ultimate Guide to the World’s Most Desirable Spirit, a readable, deeply knowledgeable tour through the history and modern landscape of this intriguing spirit.’ —Clay Risen, author of American Whiskey, Bourbon and Rye: A Guide to the Nation’s Favorite Spirit

‘Japanese Whisky: The Ultimate Guide to the World’s Most Desirable Spirit love of the ‘water of life’ shines through on every page. From the exhaustive account of Japan’s long relationship with whisky to the detailed descriptions of labels produced by its world-beating distilleries, Japanese Whisky should appeal to experienced buyers and novices alike. The perfect accompaniment to a Japanese single malt.’ —Justin McCurry, Tokyo correspondent for the Guardian

Brian Ashcraft Bio
Brian Ashcraft is an author and journalist based in Japan. He is the Senior Contributing Editor for video game site Kotaku. Previous to his Japanese whisky book, he wrote Arcade Mania! and Japanese Schoolgirl Confidential. Originally from Texas, Brian now lives with his family in Osaka. Connect with Brian on Twitter.

Feeling a tad parched now? Quench your thirst and discover the secrets of Japanese sake at these hand-selected and highly-rated sake tasting and brewery tours in Tokyo and Kyoto.

Discovering washoku through travel in Japan. Sharing the best Japanese food and drink experiences. Living in Osaka. Join me on my journey!